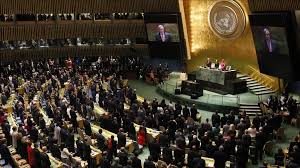 The General Assembly is the organ of the United Nations where all States converge with the same conditions of equality, which leads to say that it is the democratic organ of the United Nations, due to the equality of the intervening parties, as well as its composition. . In fact, the great development shown in International Law has been due to the relevant resolutions issued by the Assembly, such as the decolonization charter, the principles of international law for cooperation between States, the Resolution for peace, among others. .